Lots of buzz for basbaas

Is basbaas cagaar the best green chilli sauce in the world? Fahan Ahmed certainly thinks so.

The world is slowly waking up to the intriguing flavours of traditional Somali cuisine. Basbaas (it sounds a bit like ‘buzz-buzz’) combines ingredients such as dried chilli, capsicum, tamarind, dates, coriander and lemon pepper.

A lot of African food is very spicy, but the Somalian tradition is to create less spicy dishes then add chilli once the food is served. “Every Somalian eats basbaas,” Fahan said.

Now everyone will get the chance to find out how good basbaas is. Fahan and her friend Safiya Duksya have just launched their own range, East African Sisters Basbaas. 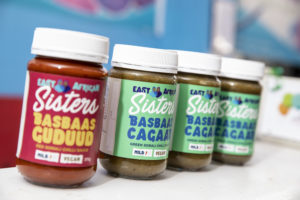 It comes in two varieties – Cagaar (green) and Basbaas Guduud (red). It will soon go on sale at Macca Halal Meats in Flemington.

The East African Sisters product is based on a recipe used by Fahan’s grandmother. “When I was growing up in Mogadishu I was taught to cook by my mother, and she made very traditional food,” Fahan said.

“My mother, my sisters and I would cook every single day. It was a habit for us, but it was also fun.”

Somalia has the longest coastline of any African mainland country, making it a great trading nation. Thousands of years of interaction with the Middle East and India as well as bordering countries like Ethiopia and Kenya have influenced the complex flavours of Somali cuisine.

The Somalian civil war forced Fahan to Egypt as a refugee. She came to Australia with a Humanitarian Visa 21 years ago, settling first in Altona and then Flemington.

Fifteen years ago she met Safiya, who was born in Ethiopia. They formed a tight bond. Between them they have 11 children and speak five languages.

“We call our business East African Sisters because our connection is as strong as sisters,” Fahan explained. “We support each other, and we support other women as well. Everyone helps each other.”

Fahan and Safiya’s project was powered-up by their participation in the Food Business Boost incubator program earlier this year, a collaboration between Moonee Valley City Council’s Flemington Works and Sustain: The Australian Food Network funded by Department of Jobs, Precincts and Regions, Small Business Victoria.

It provided workshops and mentoring specific to starting food businesses and was supported by OMIC food laboratory, The Sum of Us creative agency, food entrepreneurs Jane Del Rosso and Mariam Issa, and Melbourne Farmers Market.

Both women are now part of the Mamma’s Kitchen project, an opportunity to share their food with even more people, and another way in which they are helping empower the women from different backgrounds they proudly call sisters.

Check out other stories

What’s on this NAIDOC Week