A welcoming place to gather, learn, work and play…

Works have begun on the new Flemington Hub and upgrading the Debneys Park sporting precinct in partnership with the Victorian Government.

Construction will be in three stages:

Stage 1 (completed) - The Flemington Pop-Up has been installed as a temporary hub for key programs and services from Flemington Community Centre. The old centre has been demolished.

Stage 2 (mid-2021 to mid-2022) - construction of the outdoor basketball/netball courts, cricket nets and sports field redevelopment. As a result of these works, the Debneys Park sports field and Flemington Community Centre carpark will be closed.

Stage 3 (late 2021 to 2023) - construction of the new Flemington Hub. As a result of these works, the area surrounding the new Hub and the Flemington Community Centre car park will be closed.

If you have any questions regarding the project, email flemingtonhub@mvcc.vic.gov.au or call 9243 8888. 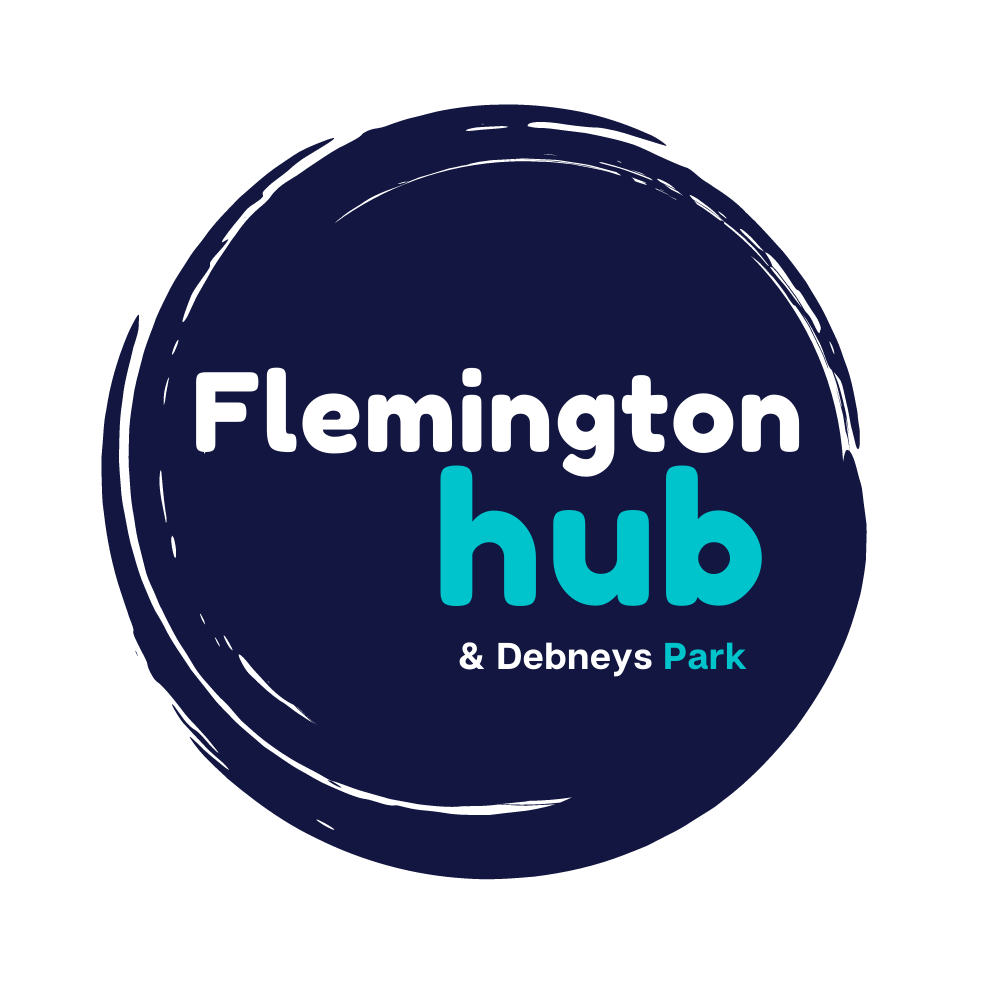 An artist's impression of what the new Flemington Hub will look like. 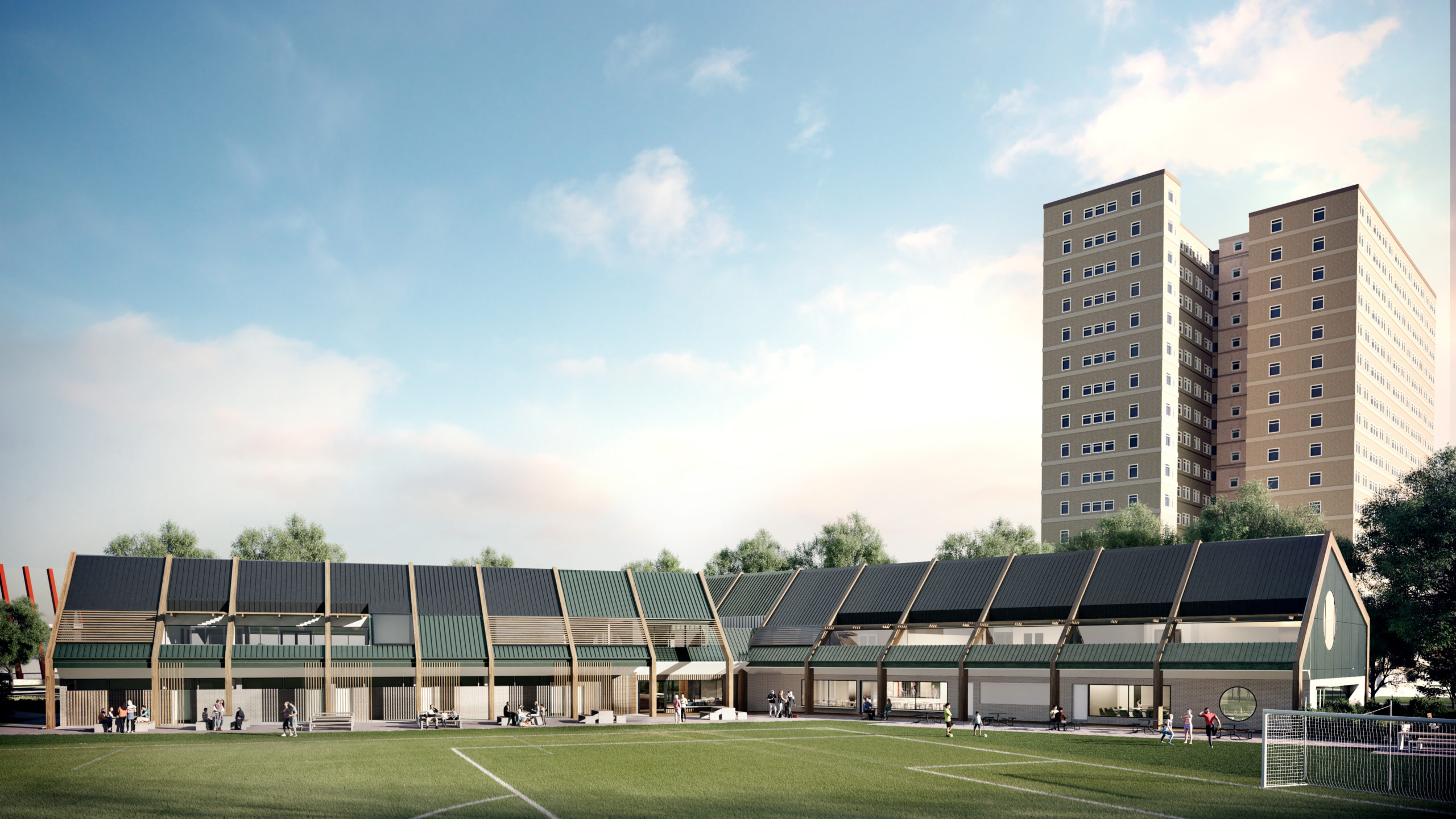 Click on the link below to watch a fly over of the new Flemington Hub. 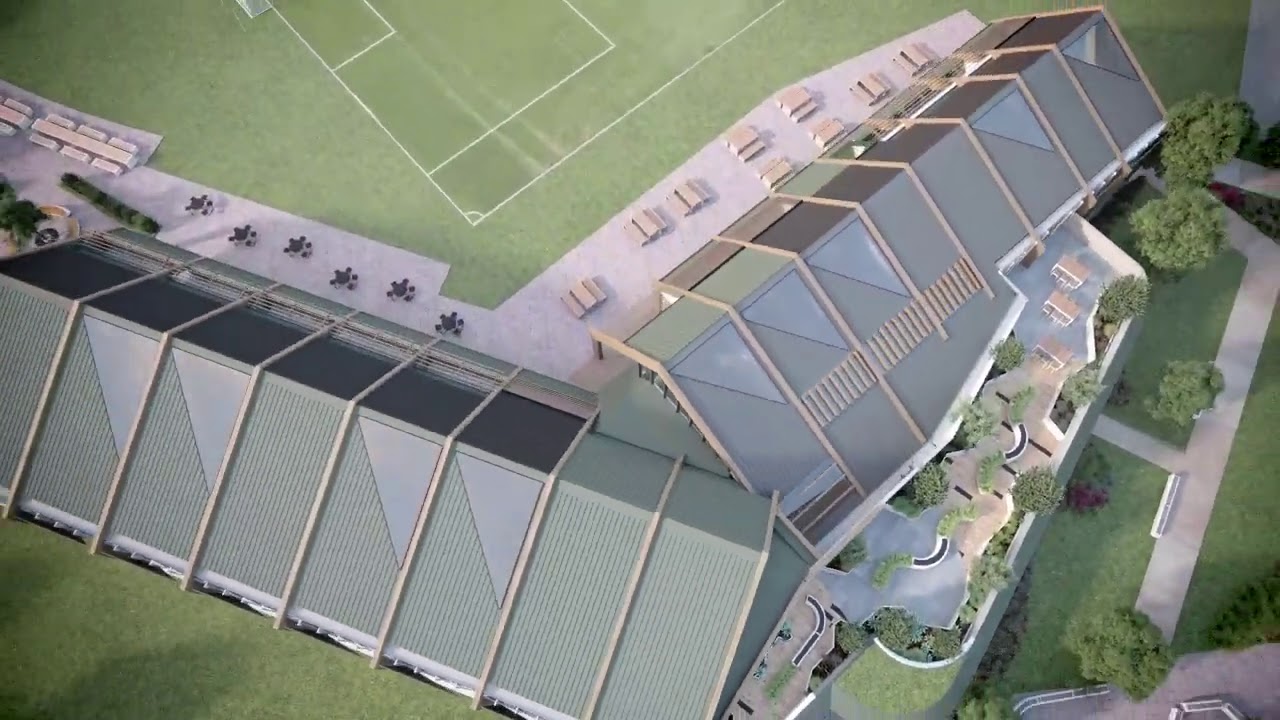 So what features will the hub have?

Hover over the hotspots on the images below to find out more about what's included in the new Flemington Hub and what's planned for the wider Debneys Park precinct. 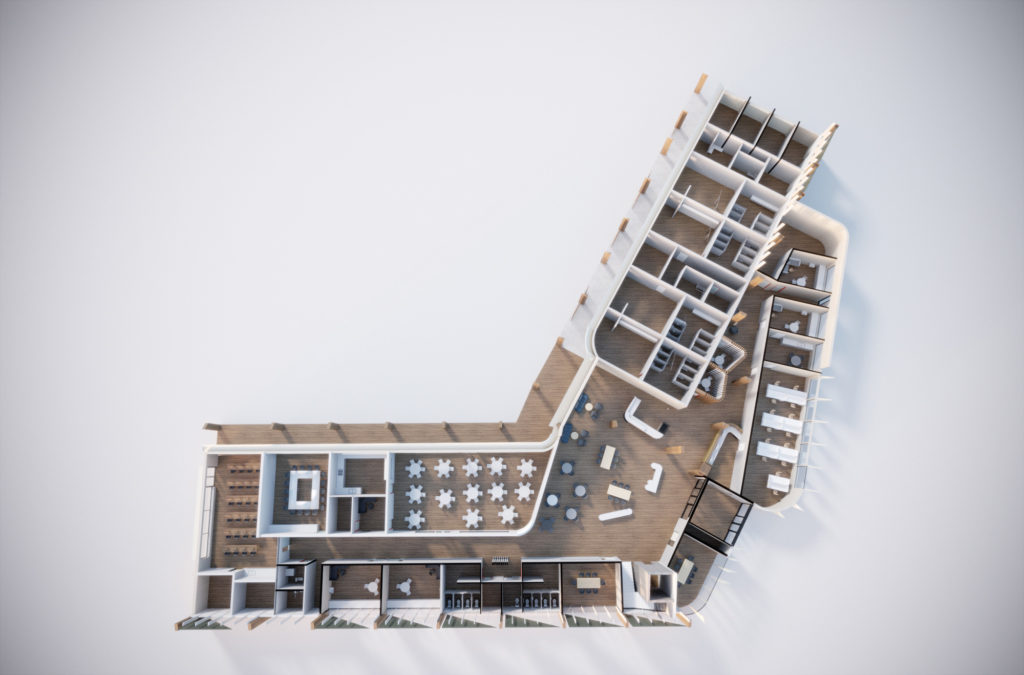 Family program room
For family and parenting programs, women’s programs and other classes

Kiosk
To support our sports clubs and other community cooking programs

Prayer room
Available for all faiths 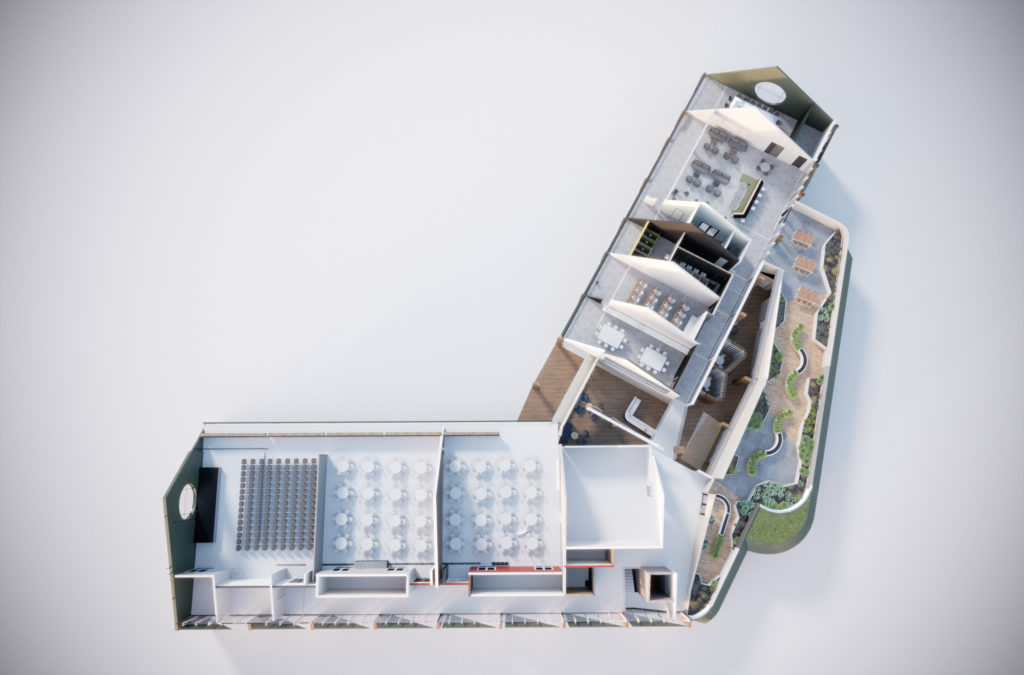 Roof terrace
An outdoor green space with places to sit, connect and enjoy the kitchen garden

We have prepared information on the new Flemington Hub in a range of language options. Click on the relevant language below to download a translated fact sheet or translated poster with information about the project's three stages.

What is planned for Debneys Park?

A vibrant new community Hub will be delivered at Debneys Park, to replace the existing Flemington Community Centre and Debneys Park sports pavilion. In partnership with the State Government, we will be redeveloping the sports fields and lighting, installing new cricket nets and constructing two outdoor, multi-lined basketball and netball courts on the old Flemington Community Centre site. Temporary facilities will be established on-site for the duration of the works to ensure our Welcoming Neighbourhoods team can continue delivering key services to the community.

What are the timelines?

The Flemington Hub and Debneys Park project will be completed in three stages:

Stage 1
March 2021 – Mid 2021
Installation of the Flemington pop-up, a temporary hub for key programs and services from Flemington Community Centre, as well as demolition of the existing centre.

Stage 3
Late 2021 to 2023
Construction of the new Flemington Community Hub.

What will the new hub include?

On the ground floor, the Hub will open into an inviting foyer with a café and space to meet friends, sit and study or work. The ground floor will feature community meeting rooms, classrooms to support family and children’s activities and other programs, consulting rooms for community organisations to provide outreach services and a prayer room available for all faiths. A multipurpose room with adjacent kiosk plus four gender neutral change rooms will support both sporting clubs and community programs. Umpires’ room, first aid and storage will also be available for our sports clubs.

Upstairs, three large community halls can be opened up into one larger space for community events, performances, dance groups, forums, conferences, workshops and more. A commercial kitchen adjacent to the halls can be used for micro-businesses, training and catering for events. The first floor also includes classrooms for language programs, training programs and meetings, a dedicated art room and a community lounge perfect for study, reading and our youth drop-in programs. A roof terrace will provide additional open green space, places to sit and a kitchen garden.

Who will run the Flemington Hub?

The Flemington Hub will be a Council owned and managed facility. The Welcoming Neighbourhoods team, who are currently based at Flemington Community Centre, will relocate and offer their services from the new Hub.

How much will it cost?

Council has committed $21.9 million to the construction of the Flemington Hub. Council was also successful in receiving a $5 million grant from the State Government, which will contribute to the outdoor sport and recreation infrastructure and sporting components of the Hub.

Where will the new Hub be located?

The new Hub will be located over the current sporting pavilion, adjacent to the existing carpark. It will overlook the sporting fields and sit alongside the tennis courts.  You can view a map of the location on the Flemington Community Hub webpage.

Will I still be able to access the park when construction starts?

Sections of Debneys Park will be closed off during various stages of construction as a safety precaution. You can still walk around the circuit path, outside of any fenced areas.

You must not enter the fenced off areas.

Will any trees be removed?

Retaining trees on-site is important to Council, and we will continue to monitor tree health during and following completion of construction. A minimum of 40 new trees will be planted as part of the landscaping of the new Hub and Debneys Park redevelopment, with a preference for native trees and shade capability. A small number of trees have been identified for removal, these trees are generally in poor or declining health and have limited useful life expectancy. No trees listed on the significant tree register will be removed.

What environmental design features will be included in the building?

Council is working to achieve a 5 Star outcome under the Green Building Council of Australia’s Green Star building rating system. This outcome would classify the Flemington Hub as achieving Australian Excellence in sustainable building design and construction.

This will be achieved through various aspects of the design including (but not limited to) PV solar panels on the north and north-west facing roof, rainwater harvesting, excellent solar-passive design, natural lighting and ventilation, plus designing a high performing building envelope to maximise efficiency of heating and cooling systems.

The material selection during the design process will be based on a strict criteria to ensure durability, use of recycled content, impact on biodiversity, and preference to sourcing from renewable sources and responsible practices.

What happened to the Flemington Community Centre?

The Flemington Community Centre was demolished as part of the project. This occurred earlier then anticipated due to the centre rapidly deteriorating in recent years.

We will continue to provide key programs and services currently offered at the FCC throughout construction, either at the pop-up facility or at nearby Council venues. You can email the staff of FCC for any program queries at fcc@mvcc.vic.gov.au.

Why do we need a new Hub?

Flemington Community Centre (now decommissioned) has supported a wide range of community services and activities. The building was struggling to meet the existing community need and has rapidly deteriorated, reaching the end of its useable life. Demand for most services is high and there is an increasing need for spaces for classes, programs, training and community events.  While the sports pavilion in the park is heavily utilised, it is also in poor condition. It has no public toilets or social space and does not comply with sporting code guidelines.

The vision for the hub is create a new heart for the community and to provide a centre that brings all people together from diverse and multi-generational backgrounds. The Flemington Hub will be a vibrant, welcoming and flexible centre, with activity and program rooms, family facilities, creative spaces, consulting rooms and sports changeroom and recreational facilities - as well as plenty of spaces to sit, meet friends and relax.

What are the other works happening behind the fences at Debneys Park?

Will my health be affected by the materials in the soil?

This work is undertaken by professionals and will be monitored to ensure all safety procedures are followed.

Was the park dangerous before these works uncovered the contaminated soil?

No, the materials have been safely buried while the sports fields have been there.

Where can I get more information?

We will provide regular updates on our website, social media pages and through our newsletter as these dates become available. You can subscribe to our newsletter on this project webpage. You can also email the Flemington Hub team at FlemingtonHub@mvcc.vic.gov.au or call 03 9243 8888.

The artwork will be collated and transposed into designs for the perforated screens on the outside of the building and also incorporated into the interior detailing.

We want the new Hub to be a facility which adds to the visual amenity of the area and showcases artwork that represents our community. To enable this, the visual theme, look and feel of the works will be informed by community. Rosa creates site-specific works and her inspirations for the artwork come from collaboration with the community, gathering stories and undertaking immersive research.

Rosa will be holding gatherings to get feedback from the local community as well as engaging with stakeholders including the Wurundjeri Woi-wurrung Cultural Heritage Aboriginal Corporation to inform appropriate recognition and significance of the land of the site.

To enhance and support a collaborative community engagement process, Council has, through the Flemington Works project, appointed two Emerging Creatives to work alongside the artist to plan and facilitate consultation workshops, then collate and evaluate feedback.

Visit Rosa’s website to find out more about Rosa and the project.

Want to get involved?